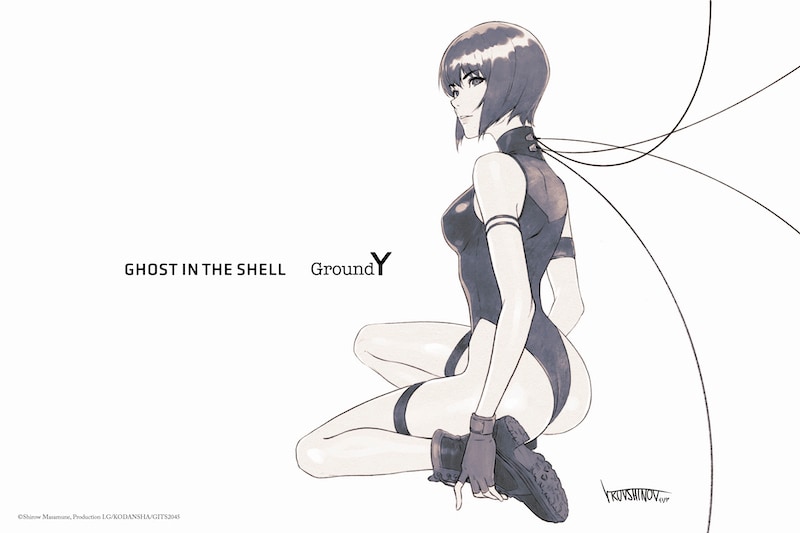 Yohji Yamamoto 's filter, while incorporating multifaceted elements that synchronize with the concept
"Genderless" and "ageless" styles are the brand "Ground Y" that proposes new possibilities for fashion.
Yohji Yamamoto, and the original anime series "GHOST IN THE SHELL SAC_2045" has been decided.

Originating from the original comic "Ghost in the Shell" released by Masamune Shirow in 1989
Various works such as animation and Hollywood live-action movies are developed, and with their radical and overwhelming world view and visual expression
The latest work in the series "GHOST IN THE SHELL SAC_2045" that has influenced creators all over the world.
By Ilya Kuvshinov, who works on the character design of this work
Focusing on the visual of the main character "Motoko Kusanagi" drawn for this collaboration
A graphic expressed through the filter of Ground Y, which inherits the DNA of Yohji Yamamoto manufacturing that advocates antithesis to mode.
A unisex collection that has always been a popular daily item in New Era.
"Tina Tamashiro" and "Shuntaro Yanagi" who are active as actors and models have been appointed as key visual models.
Photographed by Hirokazu Takei
Ground Y × GHOST IN THE SHELL SAC_2045 × New Era COLLECTION
■ Stores: Ground Y directly managed stores (GINZA SIX / Laforet Harajuku / Shibuya Parco / Shinsaibashi Parco)
Official online store"THE SHOP YOHJI YAMAMOTO"
[Special page] * Released at 12:00 PM on Thursday, July 29
https://theshopyohjiyamamoto.com/shop/e/egyxnexg/
■ Release date: August 5th (Thursday) * "THE SHOP YOHJI YAMAMOTO" will be on sale from 10:00 PM on the same day.
■ Expanded items (all prices include tax): T-shirt \ 9,900 (2 sizes available) / Hoody \ 26,400 (3 sizes available) / Coach jacket \ 29,700 (3 sizes available) Cap ¥ 8,800 (one size fits all)
[Profile of Ilya Kuvshinov]
A popular illustrator living in Japan and from Russia with over 2.3 million sns followers.
He came to Japan in 2014 and started working as a freelancer. Received the Bronze Award at the 8th International Manga Awards.
Published the first commercial art book "MOMENTARY" in 2016.
▼ official media
Ground Y Official HP
Ground Y Official Facebook
Ground Y Official Twitter
Ground Y Official Instagram
Ground Y Official YouTube
Return to Ground Y Brand Page